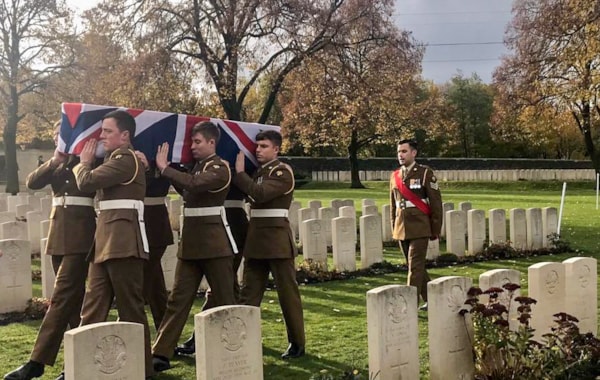 The remains of a 25-year-old First World War soldier from near Chelmsford in Essex, found more than a century after his death, have been identified and afforded a dignified burial thanks to the dedicated efforts of The Commonwealth War Graves Commission (CWGC) and UK Ministry of Defence War Detectives.

For more than a century, Lance Corporal Frederick Thomas Perkins was listed as missing, until his remains were found in January 2018 by workmen clearing unexploded ordnance from a building site near Lens, northern France.
Commonwealth War Graves Commission (CWGC) Recovery Officers were called to the scene and recovered the remains, together with several artefacts. The CWGC’s Steve Arnold, who attended the scene, said: “Working as CWGC’s Recovery Manager is a great honour. I am so glad that our meticulous efforts to find every piece of evidence enabled Lance Corporal Frederick Thomas Perkins to be identified. It is a privilege to be here today to see him laid to rest alongside his comrades from the Essex Regiment in the Commonwealth War Graves Commission’s Loos British Cemetery.”
Who was Frederick Thomas Perkins?
Frederick Thomas Perkins was baptised on 27 Sep 1891 at St John the Evangelist, Ford End in Essex. His parents were James Richard and Elizabeth Anne Perkins (nee Poulter). He was the eldest of seven children and worked for the TD Ridley and Sons Ltd Hartford End Brewery. On 27 September 1913, Frederick married Florence Annie Barker at the Church of St John the Evangelist in Ford End. Their son, Philip Jethro Perkins, was born the following year. Frederick joined 4th Battalion, Essex Regiment and is thought to have transferred to 11th Battalion in December 1916.
Full military honours
L/Cpl Perkins will be buried with full military honours at the CWGCs’ Loos British Cemetery by members of the Royal Anglian Regiment in a ceremony organised by the UK Ministry of Defence War Detectives. His grand-daughter will be in attendance and has chosen a personal inscription to be engraved on his CWGC headstone alongside his military details. It reads…
SON OF JAMES & ELIZABETH
HUSBAND OF FLORENCE ANNIE
FATHER OF PHILIP JETHRO
GREATER LOVE HATH NO MAN
His grave, in the same cemetery as 28 of his comrades from the Essex Regiment, four of whom died in the same action, will be cared for by the CWGC in perpetuity.
In recent years, the number of remains discovered on the former battlefields of the Western Front has increased significantly. The story of how and why this work is carried out features in the CWGC’s new visitor centre near Arras in France – the CWGC Experience. The CWGC Experience is a unique new visitor attraction that shines a light on the work of the remarkable organisation at the heart of remembrance of the war dead.
QUICK LINK: Help children understand what Remembrance Day is about