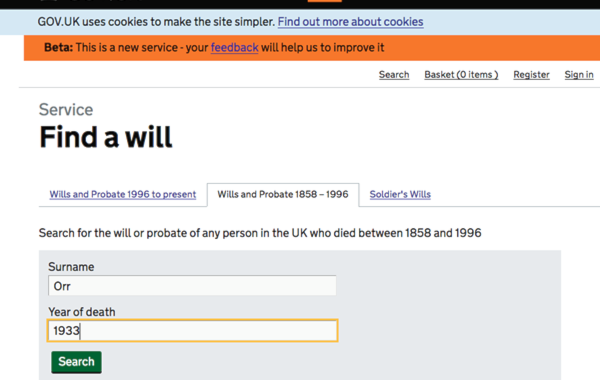 Family Tree editor Helen Tovey investigates frustrations with the online will ordering system for England and Wales, following complaints about the length of time taken to fulfil orders.

Following the price reduction in July, when the cost for ordering post-1858 wills for England and Wales dropped from £10 to £1.50 per will, many family historians have taken up the offer and the service has been inevitably inundated. This has led to frustration with the service, particularly as customers have noted their orders aren’t being fulfilled in sequence.

Family Tree reader Ruth Simpson writes: ‘I ordered one will on 11 August and had not yet received it 74 days later, yet I’ve received some ordered later. I’ve contacted them several times, but only received automatic replies saying they were busy. They offer no explanation why the will hasn’t been sent. I suspect they are doing them at random rather than in order of receipt, which isn’t fair to those who are waiting.’

Others, while frustrated, are prepared to wait. Fellow reader Joanne Phillips said: ‘I expect the service is desperately under-resourced having totally failed to predict how popular this new facility would be. It is very good value for money and is definitely worth the wait, so hopefully they will be revising their delivery times to something more realistic’.

Family Tree's questions about the will ordering service

Family Tree has contacted Iron Mountain, the company providing the ‘Find a will’ ordering service, to ask for information regarding:

We will add further information to this blog post, regarding these questions, when we hear back from Iron Mountain.

In the December 2019 issue of Family Tree we asked readers for feedback on their experiences using the service. Of the 36 wills ordered among our respondents, 17 wills had been received and 19 were outstanding and clearly a good number of those received were well outside the expected delivery schedule of 14 days.

Reader Deborah King’s situation usefully shows why customers are confused: she ordered four wills at the end of July and beginning of August, one of which she has received; and ordered a further four wills on 2 September, three of which have been received, despite that order being placed later.

Deborah writes: ‘I have twice emailed the Probate search service to ask for a progress report (although I was reluctant to increase their workload by doing so).  I haven’t received a reply to either message. In these messages I acknowledged that I understood that there was likely to be a delay but firstly that could have been anticipated but doesn’t seem to have been, and secondly I suggested that they might put some sort of announcement on the websites to advise that timescales would be longer than normal.’

The estimate timeframes are clearly a problem, as Sandra Brownsell explains: ‘You do eventually receive what you have requested. But they are persisting in using the ridiculous estimate of 14 days’ processing. They are not processing the orders by the received date.’

Echoing this, Linda Gale writes: ‘In my opinion, it would have helped if the website could have included a statement that due to excessive demand the service was taking

longer than the two weeks originally proposed. I am not criticising the staff who I am sure are working hard to meet orders, but more information might be helpful.’

The website has now addressed this matter and on placing an order for a will your confirmation email simply states: ‘Your order has been received. We will email you when your order is available to be viewed.’

Some readers are less concerned by the delay, as Barbara Roberts explains: ‘I ordered 10 wills, which became available to download in dribs and drabs, which was useful as it saved being overwhelmed.’

While others have had enough: ‘I am amazed that this has been allowed to go on so long, and that it is a failure which more often appears to be met with silence, denial and cover up. I would like to think, as a former civil servant and taxpayer, that someone is being made accountable for this abysmal maladministration. What did they expect when the price was reduced precipitously from £10 to £1.50?’  exclaimed  David Martin.

Putting his own analysis on the matter, Steve Skepper writes: ‘I ordered one on the 25 September and apart from the usual “Please allow 10 days……” email, I haven’t heard anything yet. I have submitted another order today [25 October] and the difference between the order numbers is 15,361, so I guess they’re a tad busy!’

It seems that most people’s orders are being fulfilled in the end so it may be worth joining the queue while the beta pricing system is still in place, but don’t hold your breath.

The ‘Find a will’ beta service,  priced  £1.50 per will order, began operating in July 2019 for 12 months and the site is inviting feedback, which you can provide via the link here or by emailing.

Much of what your readers are experiencing in using the Wills Ordering Service is a direct impact of the fee change that took place in July 2019.  This change saw copy request volumes almost double overnight; although we had anticipated an impact, the pace and scale of the spike caught us all by surprise.  While we have been recruiting and training additional staff to both process pending orders and meet ongoing elevated request volumes, this inevitably takes time.  As a result our timescales for processing pending orders has crept out well beyond the 10 working day target that we worked to previously.  We are on track to get back within this timeframe by early in the New Year, but would still like to apologise for the significant delay that many of your readers will have experienced in using the service over the last few months.

In response to your question about sequencing, it might be helpful to provide a little more detail about the different ‘types’ of request we receive and why this affects processing timescales.  When a request is received it is automatically checked to see if a digital copy of the document already exists (either as it has been requested before or was digitised at upon receipt into the archive). If a digital copy is available the order can be fulfilled far quicker than if the document has not been previously digitised. If the request is for a Grant or Will that has no digital image available, the hard copy document has to be retrieved from archive, scanned, pass through quality control and verified before being released to the customer. This inevitably takes longer to complete.

This means that, where a customer has multiple orders pending, it is entirely possible that the customer would receive the copy of a digitised record first.

In response to your query about whether additional information would help things at all, I would say that inclusion of the volume folio number (where known) in orders for London Probate documents before 1930 does assist the archive team greatly.

We are planning to update the Internet pages shortly to start including indicative processing timescales (which will be refreshed as we get back towards ‘steady state’) as we appreciate that missed deadlines or a lack of visibility can cause frustration.

140,323 requests have been processed since the reduction, which is an increase of  over 100% (when compared with the same period last year). We are completely committed to reducing the backlog of orders as quickly as possible and as indicated earlier, are aiming to have this done early into the New Year.